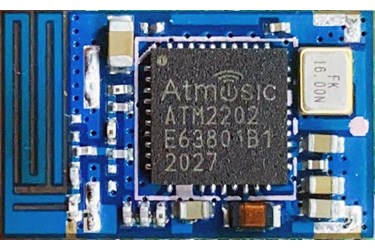 Atmosic Technologies and Globalscale Technologies are making available what is being claimed is the lowest power Bluetooth Low Energy module currently available on the market.

Atmosic, a specialist in ultra-low-power wireless platforms for the Internet of Things (IoT), and Globalscale, a supplier of IoT solutions, said that with a transmit power of only 2.4mA at 0dBm and receiver power under 1mA, the Atmosic Bluetooth LE 5.0 radio consumes 3X to 5X less power than other low power Bluetooth LE products for battery-based product designs.

Globalscale is using the Atmosic M2 Series ATM2202 chip as a low-power wireless processor for its RistrettoBin module. Measuring only 14mm by 8mm, the module is intended for energy-critical consumer, industrial, medical and commercial applications. With an on-chip Arm Cortex-M0 processor and a wide range of I/O interfaces the module has been designed to run energy-critical, edge-of-network applications.

In addition to the low power Bluetooth LE radio, the chip contains a specially designed, ultra-low power (150nA) wake-up receiver that can operate even when the remainder of the chip is in low-power hibernate mode. Unlike a typical Bluetooth LE radio that continuously uses energy transmitting beacons, the ATM2202 can remain in low-power hibernate mode until it receives a chip-specific coded message from another Bluetooth radio.

“The RistrettoBin module represents an exciting milestone for the IoT industry, offering ultra-low power consumption in an super compact design,” explained Bryan Cheng, VP of Sales & Marketing at GlobalScale Technologies. “Furthermore, the module’s wide range of I/O interfaces and tools – including an AT command software package and SDK – gives manufacturers more design flexibility to customise the module for different types of applications and use cases.”

The module comes with an easy-to-use AT command software package, plus a comprehensive SDK for wireless application development. A library of software reference designs from Atmosic is also available for many battery-based IoT applications, including contact tracing, wireless keyboards, cold chain tracking and electronic shelf labels.